Well, I’ve written about my other siblings, so I guess it is about time I talk about my little Sister. Jenifer is eight years younger than me – the same difference in ages between our mother and father. That is sometimes so hard to believe. In many ways it felt if we were two different families. Jenifer was just a punk little sister. The funny thing is that with Jon there was some jealousy. With Jenifer, though, Pam and I both LOVED having a baby sister. Over the years, we babysat a lot. For Jenifer, I’m sure that she preferred Pam to babysit, but I am fairly certain that I was much more fun!

Jenifer was such a gullible young kid. She was always up for anything, no matter what. We certainly had some adventures. I think she looked up to me and enjoyed my company. Unfortunately, by the time she was five, I was a teenager. I started to look at my baby sister as a burden and a pest. She always seemed to like hanging around with me and my friends. We would regularly look for ways to “ditch” her, some not very nice. Sad to say, I even tried to get her mad so she would go away.

As I think about some of the stories, it is a wonder that Jenifer survived. I also wonder why she likes me, even today. I was not nice. In fact, I was downright mean. It wasn’t as if I went out of my way trying to torture her. Mostly I was just trying to get her to stop hanging around me and my friends.

Jenifer and I had a game where we would each stand on each end of the pool table and throw the pool balls to each other. It was a lot like air hockey. The only difference was that you would try to catch the ball. Mean as I was, I tried to jamb her fingers against the side of the table by whipping the ball as hard as I could. Sorry, Jenifer! I guess Jon was smart enough to not play again after a couple of crunched fingers. Jenifer, though, just kept coming back for more! Even though I was trying to get rid of her, I really respected her toughness and the way she kept coming back.

Another mean moment was when we were making carameled apples. I had melted caramel on the doubled boiler. Jenifer was flitting around annoying me as usual. I tried to get her away telling her how hot the stuff was. At one point I pulled the pan from the boiler and tried to fake that I was dropping the pan when she was right there. Unfortunately, while I didn’t drop the pan, I did tip it enough to drip scalding hot caramel onto her arm. Jenifer ended up at the Emergency Room with a significant burn. I was mortified. I never want to hurt her (at least not badly), I just wanted her to go away.

Yes, there were other attempts to terrorize (but never hurt) over the years. Often, Pam or Jon got into the act as well. Mine just seemed to go further than theirs. Where Pam would drool long, stringy spitballs over Jenifer’s face, just to suck them back at the last moment, I chose for more physical terror like holding her out the window by her ankles. Why? I guess because she was so easy going, so easily tricked – and surprisingly still loved us – despite the regular family hazing she suffered. It is not that we were never nice to her. We were. There is just something about being the baby of the family where the bullying of older siblings can just get to an extreme. Fortunately, we grew out of that (okay, mostly we did!).

The other thing about Jenifer is that she gave us what we thought was good reason to pick on her. At least we thought it was good reason! Jenifer was born with some sort of adenoid disorder. It caused her nose to run incessantly. It was pretty gross, as her snot got everywhere! Worse, even, than our Boxer dog, Bos’n’s drooling jowels. I have no doubt that our family, due to Jenifer, went a long way toward the transformation of “tissue” to be better known as “Kleenix.” We went through so much of that stuff that we should probably get stock from Kimberly Clarke.

Our dad used to love to tell the story about Jenifer on her first cruise. She was about four or five. It wasn’t as if our parents ignored us, but we seemed to have a pretty free run of the ship. Jenifer liked riding up and down the elevator all day. It stopped right outside our room, so she would just go out and ride on the elevator. Oh this particular ship, there was an elevator boy who would “run” the elevator (i.e., push the floor buttons for you). He was quite young and I think Jenifer had a crush on him. He doted on her like she was his only passenger. Our room steward similarly took a liking to this cute little girl (by this time her runny nose problem was resolved and she was very cute!). He brought her bananas and other treats multiple times per day.

At some point during the cruise, Jenifer came down with the Chicken Pox. It seems that much of the crew had not been vaccinated for this. As a result, we had a boat full of sick crew members. We never knew how far it went, but by the end of the cruise, there was no longer an elevator attendant and we got a new room steward. Even then, the crew seemed afraid to even come near our cabins. Jenifer lost her following!

Despite being cute and sweet, Jenifer became quite a sassy young girl. Perhaps it had something to do with the constant bullying at home (or in spite of it). Those who know her today would have no idea how bold and audacious she was as a kid. I’m sure she still has occasions where she stands up for herself, but she is much more measured now. Jenifer is no longer the kid who would stand on her desk berating her teacher saying, “You can’t tell me what to do! If you talk to me like that again, I am going home and not coming back.” In that way, I think Jenifer might have been mimicking her elder brother. Whatever I didn’t do by my bullying, our mother and the nuns at St. Lukes really smacked that sassy streak out of her!

Sassy Jenifer (with no snot!)

Jenifer today is one of the nicest, mild-mannered women I know. She reminds me of so many of the most positive qualities of our mother. She is respectful and kind, slow to speak up unless she really thinks something is wrong, responsible, and is a bit reserved around strangers. With her friends and family, though, she is outgoing and fun to be around. She also took my mother penchant for worry. That is not necessarily a bad quality, but I worry (like I did about my mother), that such worrying can take some enjoyment out of life. Lighten up, Jenifer! 🙂

From what I can tell, Jenifer is universally well liked. Almost everyone who knows her always has positive things to say about their interactions with her. She still stays in touch with many friends from grade school and high school. Jenifer goes out of her way to maintain those connections.

Jenifer is quite the pianist. Though not quite the professional musician as her sister, Jenifer is an accomplished musician in her own right. She plays piano by ear and played percussion in the Police Band. Our Dad loved hearing Jenifer play. He always loved seeing his kids in the spotlight, but he definitely had a special place in his heart for Jenifer. Any time he saw a piano somewhere, he asked her to play – and she would. Jenifer played piano for him in malls, airports, nursing homes, street corners in Paris, and even in concert halls. She has a great talent and still plays by ear.

Because of our age differential and the fact that I left town when I was relatively young, I didn’t get to really know my adult little sister until much later in life. What a joy! Some of my favorite memories with Jenifer involve our travels together. We laughed so hard when others got so mad about being diverted on a flight back from a vacation. For us, we were happy for the extra day away. We pitied those who saw it as a curse, but definitely had fun at their expense.

Another trip that I will never forget was when Pam and Jenifer came to visit me in Germany. I was able to take some time off and we toured Southern Germany and Northern Austria. We sang in the streets of Heidelberg and Munich, danced with the Munchen Lion in a fountain, drank beer with a ghost (true story!), and hiked the Alps. What an enjoyable experience! 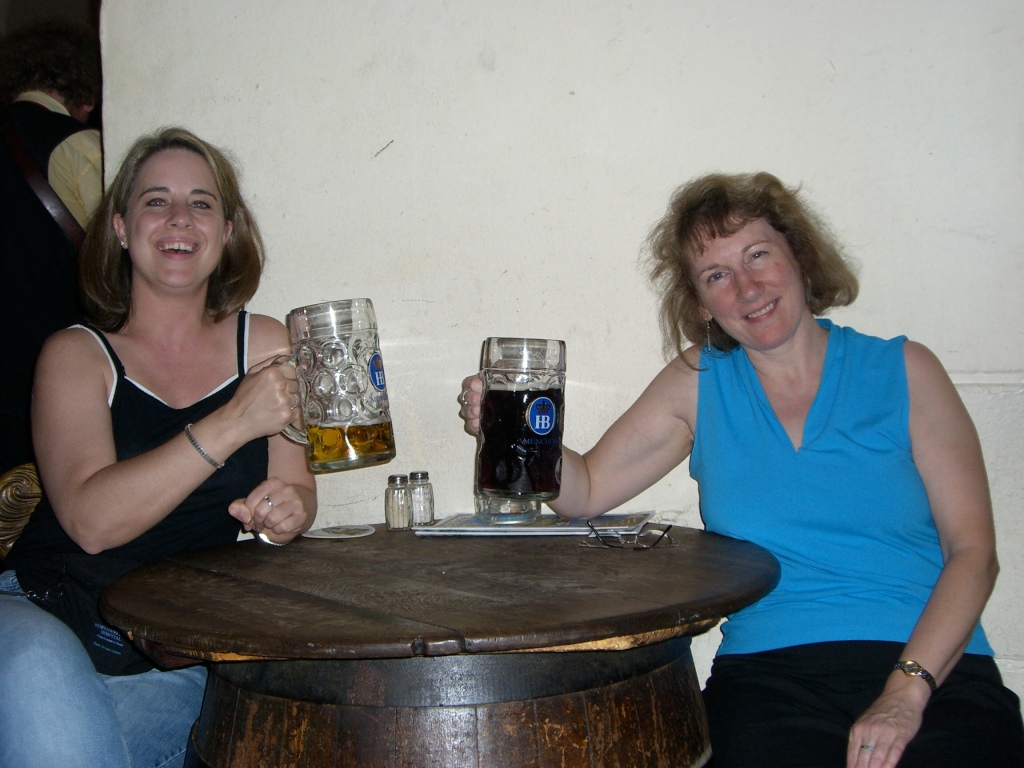 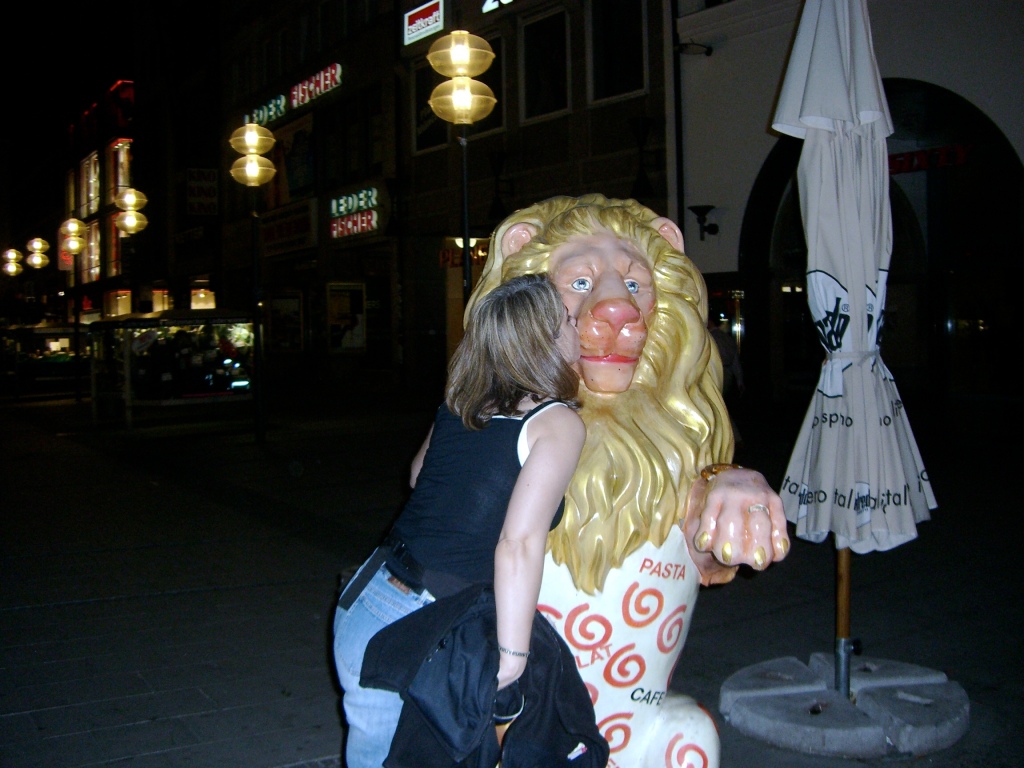 Finally, I was so proud to see Jenifer walk down the aisle to her husband, Kirk. They are a good match and compliment each other’s strengths. Weaknesses? Jenifer seems comfortable with Kirk’s love of trains. Kirk similarly puts up with Jenifer’s longtime friends, who still seem to get her out for a drink every now and then. Kirk and Jenifer met relatively late in life, but she always had her lifelong friends Cheryl, Mary Beth, Nicole, Dana, and many others, to mostly keep her out of trouble. Just kidding! They are all truly wonderful friends who have kept strong friendships through the many good and bad times each has faced.

I can tell that Jenifer is looking forward to us moving back to Minnesota. She, along with Doug Bargmann, regularly keep me up to date on the status of our home building project. We look forward to spending more time with Jenifer and Kirk. I think I’ve missed enough birthdays and other special occasions. Besides, I’m guessing Jenifer, Kirk, and brother Jon, might be excellent dog sitters!

Finally, despite ours age difference, I’ve always felt that Jenifer and I had a natural connection. Pam and Jon were the more intense go-getters. Jenifer and I have always been a bit more laid back and enjoy a good time. We love family, dogs, and laughter. I am looking forward to a lot more laughs with my baby sister in the near future!

View all posts by graysonlaw

One thought on “Baby Sister”